The Chemainus Biodiversity Education Project was a collaboration from 2007-2009 between the POLIS Project and a number of interested individuals, organizations, First Nations, and businesses in the Chemainus region of Vancouver Island, including Thetis and Penelakut Islands. It was primarily based on volunteer-based and in-kind contributions. The project piloted a collaborative learning model that drew on a combination of local and academic expertise and experiential learning in nature as outdoor classroom.

The original idea for this pilot collaboration grew out of informal conversations at Kin Park in Chemainus on a sunny day in early April 2007. A small group of people discovered they shared a common desire for fun, educational, and unifying activities that inspire diverse people to come together to share and learn about biological diversity. The project was meant to be grassroots in its approach, building on and evolving in response to  expressions of interest and needs by community members who wished to be involved. An initial focus of the project was to create interesting learning opportunities for young people in the community, and to increase general awareness of the meaning of biological diversity for everyone who was interested, no matter where our interests stemmed from. The point was to come together, respectfully, with a sincere desire to learn.

Inspiring the project was the dilemma of biodiversity loss being so BIG and the question of what can a single person or community do?  It was agreed we can start with learning what biodiversity means right in our own backyards, why it is important, and what might be threatening it at a local level. Equipped with knowledge and insights, we can strive to make more informed decisions as individuals and communities, whether on how to live well, encourage our youth in healthful choices for their future, or make land use decisions that ultimately support human and ecosystem well-being.

The goals of the project were to:

A number of field sites helped showcase local biodiversity and stimulate discussions on key issues affecting biodiversity. Appropriate sites for forest, marine, and riparian components were identified based the criteria of easy accessibility, safe, permitted without trespassing, minimal or no driving, and biodiverse or otherwise biologically interesting.

The primary forest site was Echo Heights in Chemainus, a 52-acre mixed forest in North Cowichan that was under urban development threat even though it was owned by the municipality and unique in the area given its size, high biological diversity, extensive accessible trials, and close proximity (within walking distance) to Chemainus and local schools. Echo Heights was eventually saved from development in 2014 and renamed Wul’aam (Echo) Park.

The Chemainus River served as an example of riparian biodiversity and supported learning about complex water issues related to development, and land use conflicting with community and ecosystem health. This included supporting Honour Our River Day hosted by Halalt First Nation. Shorelines in Saltair and Thetis Island were also explored to learn about marine biodiversity and participate in eel grass mapping field work. 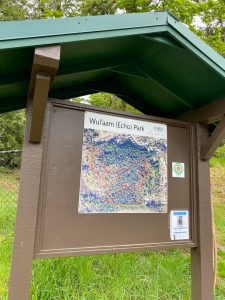 The project included a diversity of fun and educational field activities that brought together volunteers, students, teachers, youth, First Nations experts, and scientists to learn about local flora and fauna and their importance to human well-being.

A number of posters, pamphlets, newsletters, and media articles were produced.  An educational website for Echo Heights Forest / Wul’aam (Echo) Park was developed by Kelly Landry, with funding from private donations and a small grant from Shell Canada Foundation.

Many individuals, organizations, and businesses generously supported the Chemainus Biodiversity Education Project in its goals to facilitate respectful interactions in a collaborative journey of sharing and learning. What was shared continues to live on through the places and people involved.

An Introduction to Biological Diversity

Chemainus Courier: “All eyes on the birds”

Chemainus Courier: “Echo Heights medicine has a purpose and must be protected”